We were the first shark tooth web site to offer shark teeth for sale. Sharksteeth.com started in 1997 and was bought out in 1998. We have been providing other dealers, stores, and collectors with shark teeth for OVER 20 years. Our Megalodon shark tooth collection is immense and our product is 100% guaranteed to be exactly what it is stated on our site or your money back.

C. Megalodon (Agassiz, 1843), the giant “Megatooth” shark, ruled all the warm water seas during the Neogene Period [Miocene (5-24 million years ago) and Pliocene (1.67-5 million years ago)]. At the beginning of its reign, C. megalodon was unaware of the evolution of the first hominoids on land (Proconsul), but would have witnessed the first monsoons and upwellings in the Arabian Sea which connected the Mediterranean Sea with the Indian Ocean. 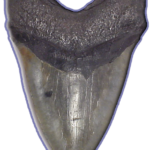 The Megalodon was the largest prehistoric carnivorous shark that ever roamed our oceans.
Megalodon, meaning “big tooth”, is an extinct species of shark that lived approximately 23 to 3.6 million years ago, during the Early Miocene to the Pliocene.
This shark lived to exceed 60ft, three times the length of a large great white. The shark in the movie Jaws was not even this large.

Where can I find Megalodon teeth?

Megalodon teeth have been found in many different locations around the globe. Divers and fossil hunters have found their fossilized teeth as big as 7 3/8 inches.

Why are there so many Megalodon teeth?

How do I estimate the size of the Megalodon Shark by the tooth I have?

You can estimate the size of the Megalodon tooth if you have a primary tooth ( one of the top teeth in the jaw which is for the most part symmetrical) It is about 1/8 of an inch for every foot. So to determine the size of a shark with a 7 inch tooth: There are eight 1/8’s of an inch in a an inch . 8 X 7″ inches is 56 ft

How are shark teeth graded and priced?

The first 2 factors in grading shark teeth are Size and Quality.
Size – Shark teeth are measured from the tip to the longest root side. Generally speaking the larger the tooth the higher the price depending on the quality.
Quality – Determined by how complete the tooth is. The more chips, missing corners or missing tip the less the value.
Other factors in pricing a tooth are:
Locality
Rarity
Color

Why are teeth so many different colors?

Teeth have the ability to take on many other colors from the minerals they come in contact with.

Gray and Tan are the most common colors.

Brown teeth are usually from being in Tannin and Leaves too long.
Iron deposits build up from leaf decay trapped in pockets along the bottom. The iron starts building up on the teeth. Sometimes the iron coating can get very thick and is not removable as the iron has bonded to the tooth.

If you have ever seen fresh water rivers that have a tea colored water this is usually caused by Tannin. Tannin is decayed leaves and bark

White color teeth are usually from being replaced by calcium carbonate sediment (broken down seashells).
A Great example of white color teeth are found in Summerville SC teeth. White teeth can also be caused from to much acid by Tannin (acidic burning).This would be in areas that the tooth is exposed on a flat bottom where the leaves don’t have a chance to accumulate. Such as tidal areas that removes the leaves stopping the accumulation of iron deposits.

Orange is found from iron in a sandy type sediment. Georgia red clay is a great example. You can also find iron rich sand off shore in North Carolina.
Black: Black teeth are usually caused by anaerobic bacteria or a black mud.

There are many other colors teeth come in: yellow, green,off-white etc .